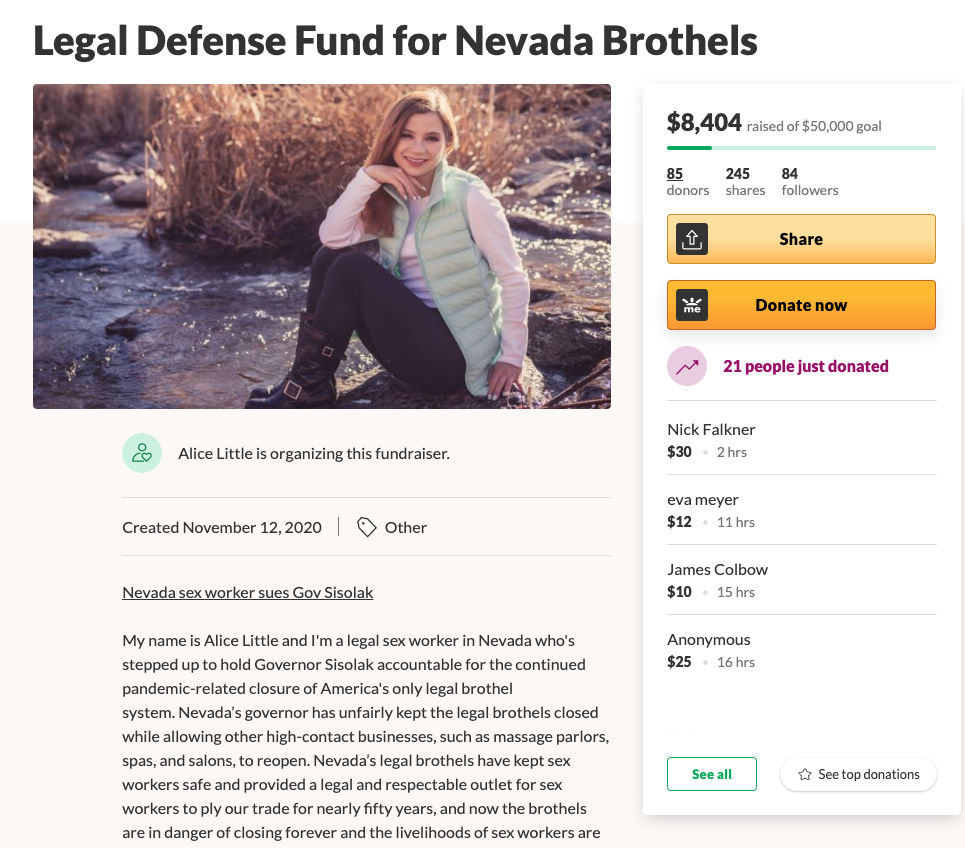 Alice Little, a legal sex worker in Nevada and quite possibly the highest-paid one in the US, is suing the state of Nevada to reopen its brothels, according to Yahoo Life.

Little is an employee at the BunnyRanch Legal Nevada Brothel in Mound House, Nevada. The brothel has been closed since Mar. 17, despite other “close contact” businesses reopening.

Little recently filed a complaint and motion for a preliminary injunction against Nevada’s Gov. Steve Sisolak in the Third Judicial District Court in Lyon County to reopen brothels. She cites unstated damages for her lost wages and seeks the right for her and other licensed sex workers to “ply their legal trade” at private locations.

The lawsuit said Sisolak has “without any rational basis, decided to single out brothels.”

“It would be understandable if the governor kept all close-contact businesses closed. But the fact that massage parlors, estheticians, salons, escort services and other non-essential businesses have been allowed to reopen lead me to believe that the governor’s decision to keep brothels closed is just blatant discrimination against Nevada’s legal sex workers,” Little said in a press release.

“I just can’t let the governor arbitrarily decimate the livelihoods of an entire class of hard-working women. That’s why I decided to take legal action.”

Little is drumming up her legal battle with the state. She launched a GoFundMe campaign last month that has so far raised $8,404 for her legal defense.

The high-rolling hooker said her lawsuit has been “self-funded up to this point, and now I’m asking for your help to allow me to pursue this case all the way through to a successful victory.”

The Nevada Independent spoke with other sex workers who say the brothel shutdown is “discriminatory.”

Kiki Lover, an employee of the Sagebrush, told the local paper that Sisolak is “discriminating against sex workers,” adding that the industry’s collapse has forced many women out, and some are now homeless.

Little told Yahoo that the risk level of contracting COVID-19 is not that different from other services, such as a massage parlor.

In April, brothels were preparing to reopen, but eight or so months of closure, at the hands of the state government, has forced the industry into collapse.