A Tale Of Two Markets: Visualizing The Huge Impact Of The Covid Vaccine Across Assets 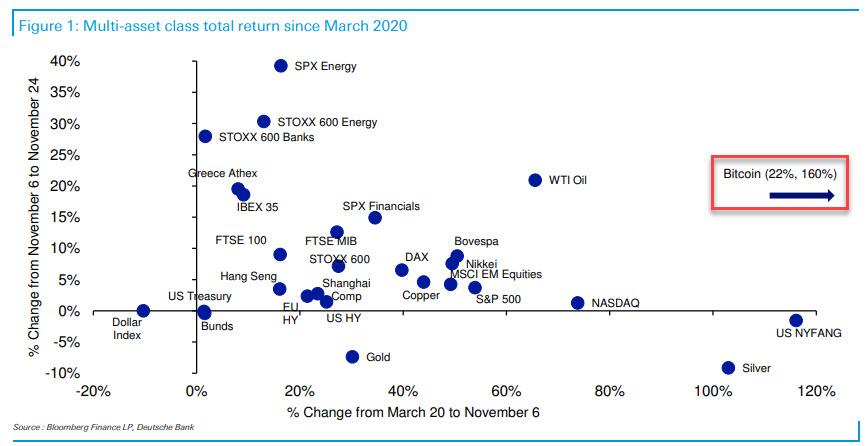 The story of the market since the March lows has been one of two parts, the first of massive FAAMG/tech/growth/momentum outperformance, and a second one in which value and cyclicals was burst higher; the only question is where does one put the bifurcation point.

According to one strategist, Deutsche Bank’s FX strategist Alan Riskin, that day is August 11, “when news of a Russian vaccine retrained the mind on how markets might respond to further positive vaccine developments.” The chart below shows asset returns from March until August 11, and is a representation of market price action dominated by risk negative virus news, versus a period when the virus story shifted progressively to ideas of an eventual vaccine helping risky assets.

Another suggestion comes from credit strategist Jim Reid who has done a similar chart but instead of August 11, he has picked the Nov 9 date as the critical inflection point in asset returns. As such the y-axis only looks at returns from just before the  Pfizer/BioNTech vaccine news just 16 days ago with the x-axis from March 20th to November 6th.

Remarkably, and in keeping with the great rotation theme that has been discussed here extensively in the past two weeks, the US NYFANG index is only marginally down since the Pfizer news even though it went up +116% in the 8 months previously in response to the pandemic. At the same time, such formerly beaten down sectors as energy and bank stocks have led the charge post vaccine news. Additionally, as Bloomberg Ye Xie writes, while the S&P has gained just 3% since Nov. 6, the Russell 2000 index climbed 12%. Even more stunning is the S&P’s energy sector’s 35% rally since then.

Meanwhile, the surprising winner across both interviews, is Bitcoin which “is a force of nature and is up an incredible +160% since March and +22% post vaccine.” Finally, Gold (-7.4%) and Silver (-9.1%) have languished over the last 16 days having been strong in the prior period.

Looking ahead, Reid writes that one of the key themes of 2021 could be that the S&P 500 might for once not be the global barometer of risk appetite, and adds that “it’s not impossible that we could have a good year for risk but with the S&P 500 down due to its heavy tech mega-cap weightings.” Notably, Deutsche Bank’s equity strategist Binky Chadha is the only strategist on Wall Street who forecasts a lower year-end price target for 2021, expecting the S&P500 to close next year at 3450, down around -5% from current levels, precisely because the rotation out of the current tech market leaders will be far more disruptive than what all of his far more optimistic Wall Street peers expect.